I'd be an idiot not to take advantage of Feather River's shad run. Living five minutes away from the Feather is quite the pleasure, especially when the fish are present throughout the system. Although it's still early in the run, there are plenty of shad around to provide enough opportunities to catch a few. Plan on bringing you're A-game if you want to find and hook one.

"You tie you're own flies?" asked the boat angler in the middle of the river,  "Yeah!" I replied loudly. "Seems to be workin' pretty good!" He yelled back. I gave him a thumbs up. Little did he know that I must have changed flies about a dozen times only to find that what was actually working was the presentation I was using.


Patience and technique is the key. Gear anglers have the first but the latter is something that I'm not seeing while I'm out there. This is probably why the run I was fishing was lacking the usual combat crowd. The majority of the shad anglers have moved to a hole where the shad are stacked up waiting to ascend upstream, fish that spot long enough and your bound to hook a few. 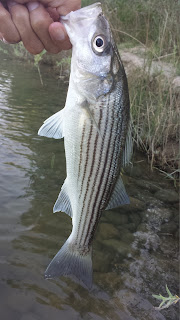 The run I fish always produces shad but by no means am I hooking double digits, just a few in the net here and there. Not a lot of numbers but you can't beat having an entire run to yourself!

After a few trips this year, I've developed a personal system to help maximize my shad fishing efficiency. This system involves utilizing several techniques to try and give the shad what they want to see.