Spey casting and swinging big flies is my favorite method of taking fish on a fly rod. Although the number of fish I land while swinging is low, the takes are absolutely heart-stopping. There are thousands of streamer patterns that have been designed to catch fish on the swing but with so many on the market it can be difficult to find "the one".

The Sculpinno is a pattern I designed specifically for swinging. My Hero Sculpin was great for stripping however it was a bit too heavy for swinging. It took a few trips before I was confident in the Sculpinno but it has since proven its design.

Step 1 - Start with the trailer hook. Pull both ends of the intruder wire through the top of the eye. As the wire forms a loop, pull the hook through the loop and pull the wire tight. The wire should be pointing down not up.


Step 2 - Start your thread and make a few wraps around the wire so that it stays in place. Tie in your rabbit strip in the middle of the shank. Be sure to split the hairs before securing the rabbit strip. Wetting the fibers helps make splitting the hair easier. Whip finish near the eye of the hook.

Take a bodkin and dap a bit of Zap-A-Gap to the bottom where all the thread is to make sure everything stays in place.


Step 3 - Take off the trailer hook and begin the body hook. Any straight eye short shank hook will do. In this tutorial I am using an Umpqua U502 size 4.


Step 4a - Before wrapping in the wire, make sure that both ends of the wire are parallel to each other and not twisted.


Step 6a - Dub in a good amount of white ice dub and be sure to leave at least an inch of bare shank.


Step 6b - Take a dubbing brush or a piece of velro and brush out the fibers from the dubbing.


Step 7a - Tie in the olive marabou by the top stem.


Step 8a - Tie in the red guinea feather by the stem.


Step 8b - Spin the guinea feather. I like to use hackle piers to pinch the top of the feather. After a few turns, secure the wrap, pull back the feathers, and secure again.


Step 9a - Tie in a sculpin olive marabou feather by the stem.


Step 10 - Tie in the pseudo eyes on the bottom of the hook. Figure eight the thread to secure. Dub some olive brown ice dubbing around the pseudo eyes.


Step 10 - Be sure there is some dubbing underneath the eyes as I often miss dubbing this spot. End your thread at the eye of the hook and double whip-finish. Use a pair of metal cutters and clip off the body hook. Done! 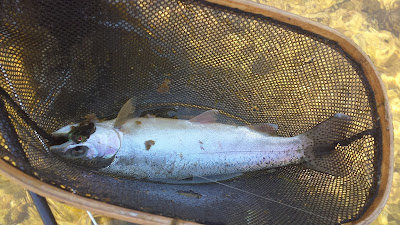 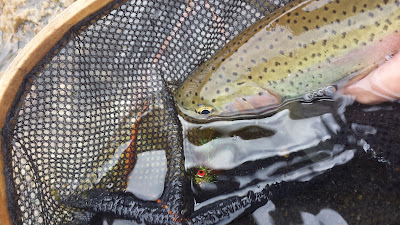 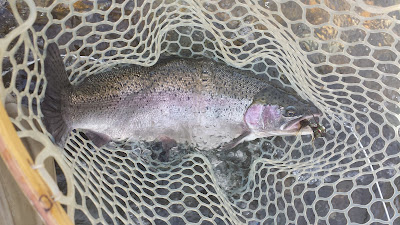 I wanted a swinging streamer pattern that had a little flash but not too much, good movement underwater, some weight but not too heavy, a good big profile but not too overwhelming, something familiar that I know works, and simple to tie. The Sculpinno was an amalgamation of these ideas.

I was a bit hesitant about this pattern as I don't have a lot of confidence in swinging big streamer patterns. After a few successful trial runs on different rivers I'm more than happy to announce... it works! It really works!