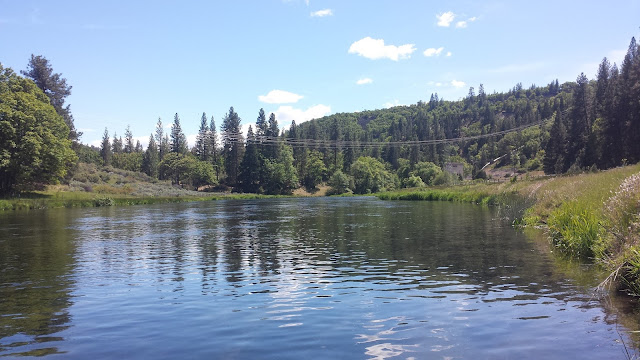 The last time I was on Hat Creek was about two years ago during a day trip to fish both Hat Creek and the Pit River. As I stalked the banks I found fish but wasn't able to convince any to take my flies. The creek was in rough shape due to it's decline from the invasion of nonnative plants, muskrats, sediment slugs, and erosion. It is a sad tale of a great fishery that is now gone.

Although I've heard stories of how great Hat Creek was back in the 70s I never lived to see those days. Caltrout is working hard to restore Hat to its former glory but until that day comes this is the only Hat Creek I know.

Fly fishing a spring creek is something I don't get to do as often as I would like and though I was refused by Hat Creek last time, this time I came prepared with three days dedicated to fishing the most famous spring creek in Northern California.


Before my trip I was keeping a close eye on the weather at my destination. The forecast read sunny on my arrival, chance of showers the second day, and sunny again on my final day. I was a bit worried about the second day of showers but in fly fishing you never know until you go.


I made my base camp at Bridge Campground in hopes of fishing upper Hat Creek during the afternoons however the creek was running very high in this section. The first day I fished the spring creek section of Hat was very good. A windless day made it possible to sight nymph fish that were feeding in-between weed beds. After hooking and landing two nice red Hat bows sight nymphing I continued onward to look for more of a challenge.

Stable warm weather brought a good PMD hatch in the afternoon and the fish were on them until about 4pm. During the hatch I hooked a few fish on dries but they didn't stick.


The ultimate challenge came to me when I found Carbon Flats below the new bridge. This area is relatively flat with a few deep slots, fallen trees, and weed beds. Some of the biggest fish live in this section but they are extremely difficult to catch. Not only do your presentations have to be perfect, you must also lead the fish whereas these fish cruise around rather than stay in a feeding lane.
In the evening a good PMD hatch started coming off again but I couldn't get anything to come up for my fly. It wasn't I shook my fly during a retrieve that I got a take... too little too late. I fished this section until dusk and was left with two hook ups that were felt but not landed.


The following morning was overcasted with a few scattered showers. The fish were on PMDs again but this time I had better luck. With a retied 6x leader and a PMD comparadun I was able to hook every fish that I targeted including a nice 16'' bow. Most of the fish were small but spring creek dry fly fishing is still spring creek dry fly fishing.
The wind started to pick up around noon so after a good morning I returned to base camp to look for my next venture.


I gave the upper Hat a shot but the flows were too high. Once I got back to camp I looked on Google maps for another stream I could possibly fish. While scrolling around the Pit River, Burney Creek immediately grabbed my attention. I set off to Burney Creek in hopes of finding fishable and wadeable water.

The rain was coming down a bit harder around Burney Falls but I came plenty prepared. As I hiked down to the falls I noticed a caution sign in the middle of the trail. The sign read that the trail loop for Burney Falls was closed due to storm damage but I had just paid $8 entrance fee so I was going to get my money's worth. As I tight-lined the creek downstream I might have missed where they blocked the trail...

Burney Creek was on fire! Every fishy spot had a fish in it. I hooked a few fish over 16'' and even a big 4#er that shook me loose. The fish put a real bend on my 3WT and I left the creek fully satisfied.

I spent the evening on Hat again but unfortunately I couldn't find any big risers. I caught a few small fish on the dry and ended up going back to back camp at around 8pm.

The third final morning on Hat should have been epic however it wasn't. I believe the rise in pressure after the front put the fish down. Despite a great PMD hatch in the morning nothing was rising. I left disappointed but was happy that I had some success the past few days.


Overall the trip was good. I definitely learned a lot on how to fish Hat and that's all I really wanted. It was interesting to see all the anglers crowd Powerhouse riffle instead of the spring creek. Why would you drive all that way to fish a riffle when you have such great water below?
If I could do it again I would fish Hat in the morning then head over to the Pit in the afternoon and then finish the day on Hat again.

Hat Creek is an amazing fishery that might make a comeback during my lifetime. It's going to be awesome to watch as the creek comes back to life and fishes like it did back in the days. Until then this is the Hat Creek I know and though she's not the best spring creek I still think she's great.