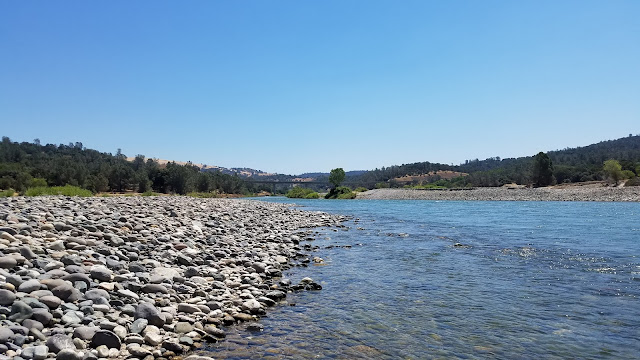 Summer has officially begun and the weather this week is forecasting record breaking peaks with several triple digit days. It's time to put the waders away and start wet wading again. The flow on the Lower Yuba was at a high ~3500 CFS when I visited but it was fishable despite the limited wading. The water was nice and cool and had a beautiful blue hue to it. The bug life is slowly making a comeback as I observed midges, two or three golden stone adults, and small PMD nymphs and duns.


I spent the morning scouting and prospecting different runs and holes around HWY 20 bridge with a streamer rod and a nymph rig. I fished every fishy spot that I could cast to and was successful in finding a few Yuba bows. The fish I found were holding around solid structure and in seams that were relatively deep. Most of the fish I caught were on PMDs and were small compared to what I'm use out there however they looked healthy and fought hard like they usually do.

The flows have been upped 400 CFS which is a bummer but it's getting there...