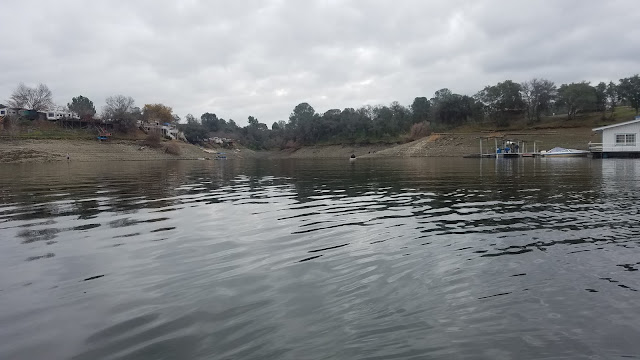 Lake Amador is a small reservoir located outside of Sacramento in Amador County. There isn't much to the lake aside from its self-claim as one of the most planted trout lakes in California. The lake use to plant a unique strain of trout called the Donaldson trout however it's been years since the last plant. The Donaldson trout is a "super trout" that was created through selective breeding between strains of both cutthroat and rainbow trout. These unique trout made Lake Amador famous whereas they were known to grow into hefty, hard-fighting, and trophy fish. As far as I know these fish have not been planted since the drought.

I've been meaning to check Amador out for a while now and though my chances of catching a trophy trout were very low, there were plenty of planted Mt. Lassen rainbows to target... or so I thought.

The cold months are usually when the resort begins planting their several thousand pounds of rainbow trout. Recently the resort have been planting Mt. Lassen rainbows, the most famous strain of rainbow trout. There were plants of an albino strain of rainbow trout called "lightning trout" in the spring however recent reports haven't shown any being caught. The research I had done before heading out looked good however reports from pay-to-play lakes tend to focus on, "Look how many fish this person caught! Amazing!" rather than how the lake is actually fishing. I was skeptical.


The weather was perfect. Overcast and cloudy with low barometric pressure due to an incoming storm. Had this been a trout stream or a trout lake the fishing would have been outstanding. But alas this was a put-and-take-pay-to-play lake that doesn't stock fish for it's weekend warriors. When the missus and I arrived at the lake we observed a receding lake with over two dozen anglers trying to bring home some dinner. Near the dam was a family that had three nice size trout on a stringer but other than those three fish I didn't see a single fish pulled out of the lake.


We fished from our tubes with me fly fishing and my wife gear fishing. As we were fishing throughout the day we watched as several boats trolling past us leave the lake skunked and disappointed. "What a waste of $27," I said to my wife as we began to kick back to shore.

About three or four hours in was when I decided to call it quits. There's no use fishing for fish that aren't there. As we were leaving we overheard a yelling conversation between a little girl and their fishing neighbors. "How many fish did you guys catch?" asked the little girl to the family near the dam. "Three. How about you guys?" replied the boy. The little girl yelled back, "We caught zero!"

You'd think with thousands of pounds of trout planted that someone would catch something. It looks like the best time to fish the lake is literally when it gets planted which seems to trend on Mondays, Wednesdays, and Fridays. It seems a bit egregious to charge money for parking, fishing, and launching at a planted lake where you aren't guaranteed to catch at least one fish, but that's the risk we took.

Having left fishless and a few dollars poorer, we packed all our fishing gear and went mini-golfing instead. Long story short; don't go fish Lake Amador, do go mini-golfing.