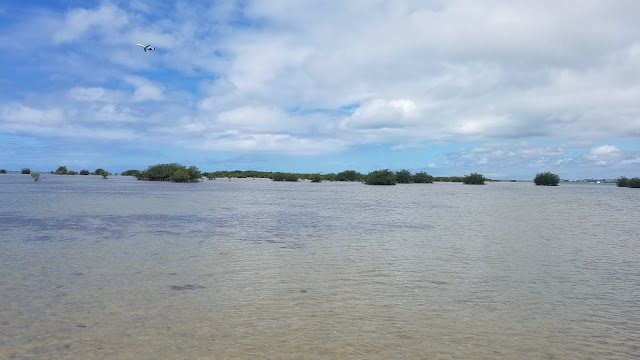 Bonefish are one of the most prized and sought after saltwater fish that fly angler's target. They are notorious for cruising shallow flats, rocketing off as soon as they are hooked, and only taking flies that are presented properly.
During my time in Oahu I was finally able to meet these fish in person and see what all the buzz was about.


The best way I can describe a bonefish is if a carp and a steelhead had a baby and that baby lived in the ocean. Bonefish feed on prey that live near the bottom much like carp in freshwater and are easily seen on the flats once your eyes have been trained what to look for. Bonefish are like steelhead in that they are powerful swimmers and a good day is a fish or two at the end of your line.

I've heard and read that the bonefish on Hawaii are different from bonefish from other parts of the world. They are rarer, bigger, smarter, and harder to catch. These fish have been preyed on by humans for thousands of years and continue to be caught and eaten my the locals making them hyper wary of bait and flies. After trying my luck out on the flats myself I found everything about these Hawaiian bonefish to be true and more.


The saltwater flats are unlike anything I've ever fished before. The flats of Oahu are made mostly of coral with deep sandy channels that will often split access to the next flat. I spent most of my time fishing the flats to the east of Diamond Head. The beaches of Hawaii are all public access however the best and easiest access to the flats were found throughout the various parks along the coastline. The flats were also quite void of fish which I was not expecting. The fishing would often be slow which made sighting other species on the flats more exciting than the bonefish themselves.
Out on the flats of Oahu you will find that mother nature has left you with very few friends. Your only friend on the flats will be the sun which will help you spot the slightly greenish glow of the fish as they cruise around. Clouds made sighting fish difficult but not impossible. Your other enemies will include the wind and coral all which are very prominent in Oahu.

Imagine casting at a good size trout that is cruising up and down a lake eating dries in shallow water. Now factor in 15+ MPH winds with 20+ MPH gusts. Good luck, have fun...
The amount of wind on the flats was insane. The heavy wind made sighting fish difficult as well as presenting the fly extremely challenging. A little too close and they'll spook and a little too far and they won't see it. I was unfortunate to only fish windy days throughout my trip which made the fishing quite frustrating.


The coral was another bane of the Oahu flats. There were several ways to present your flies to these fish however I found that the presention that got the most attention was long slow strips. Too slow and you'll snag on the coral, too fast and the fish will spook. The coral literally snagged on everything. I can't tell you how many times I would get a fish to follow only to have my fly get caught in the coral.


After hooking two bonefish on my own that broke me off I wanted to spend more time exploring the island with my wife. Instead of spending more hours trying to chase unicorns I hired a guide from Fly Fishing Hawaii. Not only did my guide Makani have a cool name, he was also a cool dude. If you want to fish with a local Hawaiian fly fishing guide that knows his stuff Makani is definitely your guy. Makani took me out on his boat to where I believe was the best spot to target bonefish. These flats next to the airport were amazing and full of fish. Although the fishing conditions were very far from ideal: heavy winds, mostly cloudy, and fishing off a full moon, we managed to get a two grabs from a bonefish and land three species that I can add to my "have caught" collection. Sometimes the off catches can be more exciting, fun, and memorable than the targeted species. I highly recommend Makani's fly fishing service.


Throughout my trip I managed to hook four bonefish that broke me off as soon as I stripped set. I spotted more than enough fish and had plenty of chances to present my fly however the elemental factors were just too much for me and I was not destined to land any this time around. I did however manage to catch several different saltwater species that I was happy to have at the end of my fly line. All-in-all Oahu is a tough place to bonefish, I'm glad I live in California.