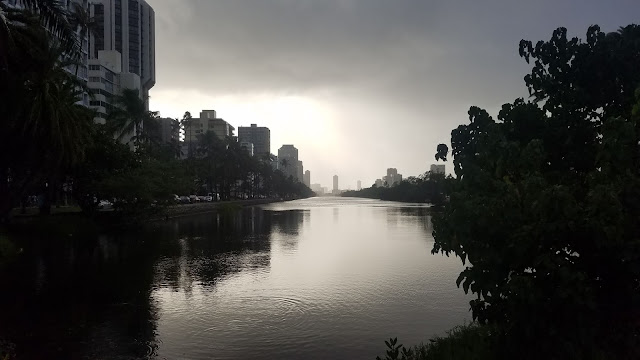 The island of Oahu has very few freshwater streams however where there are streams there are exotic species of fish to catch. One of the most popular freshwater species that was introduced to Oahu is the peacock bass. There are currently only two places in the U.S. where you can catch a peacock bass, Lake Wilson in Oahu, Hawaii and various canals in southern Florida.


The most abundant freshwater fish I found on Oahu was the tilapia. I found tilapia in nearly every body of water except the ocean. These fish are primarily herbivores therefore I could not get them to eat a fly though I was able to accidentally snag one while fishing for baby barracuda.


Lake Wilson in Wahiawa is the prime freshwater destination of Hawaii. This small lake was created primarily as an agriculture reservoir. It is home to many introduced species such as the peacock bass, largemouth bass, tilapia, oscar, red-devil cichlid, and other exotic species that were probably dumped in by irresponsible owners.

The lake runs dirty which means that the best flies were either going to be a dark or light colored pattern. I was suggested by Nervous Waters Fly Shop to use bright flashy patterns.


When I arrived at the lake I found it much lower than I had anticipated. The lake was probably 10-15ft below its full capacity. This made getting around easy but fishing more difficult because there was less habitat for the fish. The lake was surrounded by tropical trees and the bank was made up of  red muddy clay with many small holes. It was like a little Amazon jungle.


I was lucky enough to catch and land my first peacock bass after covering a bit of water. The peacock bass I found were hanging out around cover such as fallen trees and rocks. I was able to sight a few but they were very spooky. I also saw other fish such as tilapia, red-devil, gar, oscars, and other smaller cichlids. "What is that?" was the what I asked myself the entire time I was out there.


One of the local fly anglers I talked to told me that the lake has been in decline for the past few years. Lower water levels and a lack of stocking has hurt the peacock bass population making the fishing, "Not like it use to be."
I found the Hawaii fishing regulations to be more lax than California fishing regulation which suprised me. For one you don't even need to have a license to fish the ocean only for inland waters. Hawaii does have a restriction on certain species however the list is small and if no license is required what'll make an angler go out of their way to read the regulations? With a state dominated by an Asian majority what will eat "anything that has two eyeballs and swims" you'd think the regulations would be more strict. It's an odd system that really makes me appreciate the California regulations.