In Search Of Gold At Glacier Lake 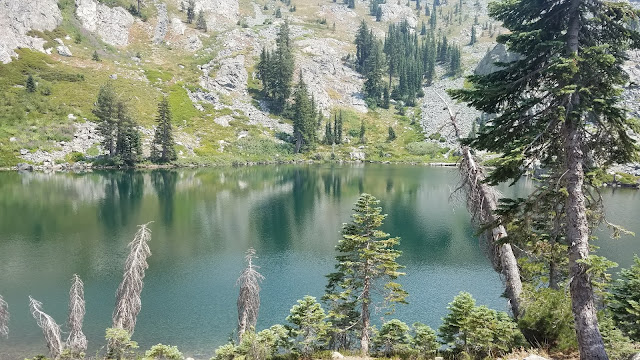 Glacier Lake is a high elevation lake that sits at about 7,200ft within the Grouse Ridge recreation area. It is said to be one of the few lakes within the Northern Sierras that is stocked with golden trout. The golden trout has been on my bucket-list since I started fly fishing and I wanted to give Glacier Lake a try for my first.

The hike to Glacier Lake begins near Grouse Ridge campground. The road getting up there in my opinion was rough even in a higher clearance crossover vehicle. Forest Route 18 was nice and paved but once you turned on onto Grouse Ridge road the road becomes a rocky dirt road with very little turnout room for the next five miles. Despite the conditions of the road we did see some sedans that were heading down and a Prius at the top which boggled our minds on how they managed to make it up without tearing out the bottom of their vehicle.

My wife and I just purchased some new day backpacking equipment at REI that we wanted to put to the test. I properly planned out my 40L pack with a few essentials for the trip whereas my wife just sort of put everything in her 24L pack where she wanted it. "Wow, you're better prepared for this than I am" is a comment that many men don't often hear.


We had just ran a 5K two days ago and told ourselves that we were going to take it easy. The hike is about 3.2 miles and is rated at a moderate difficult. We started our hike at around 11am. The hike to Glacier Lake trail begins on a 500ft decline which was nice however we knew it was going to be a tough hike back. After the decline was a steady stretch of flat that was nice and relaxing. It wasn't until the last mile where we had to climb back up about 500ft to reach the lake. We arrived at Glacier Lake at about 2pm and it was absolutely beautiful.

Once we settled down I quickly started scouting around the shoreline after lining my rod. I started to become worried after not seeing any signs of fish in the lake. I've read that they stock the lake every year however I couldn't find any information on when they last stocked it. As I was covering water around the lake I saw a few risers which relieved some of my worries however most of the rises were in the middle of the lake. I tried many different techniques such as throwing dries, sinking versileaders, and nymphing however I couldn't get a single hit.


"I give up" I said to the missus. It was about 5:30pm and it was time to start heading back. My wife reported that she saw a fish in the area she was sitting in. "What color was it?" I asked. "I think it was yellow" she replied. I left Glacier Lake fishless but at least I knew they were out there. We took the Sand Ridge trail back and had an awesome view of the surround area.

I have a feeling that if I stayed and fished during the evening I would have caught something however we only planned for a day trip. I hope to try Glacier Lake again as well as the many other lakes in the area to try and catch something. I plan on bringing a packraft the next time to get to the places that I couldn't get to from the bank.
From what I saw the Grouse Ridge recreational area looked like an excellent place to go backpacking and I definitely want to try to do an overnight stay there someday.