Pyramid Lake is a remnant of an ancient lake that covered the majority of northwest Nevada during the Pleistocene/ice age era. Pyramid Lake covers over 120,340 acres and is one the largest natural bodies of water in Nevada. The lake is home to the world's largest cutthroat trout the Lahontan Cutthroat Trout. This particular species of cutthroat trout spent thousands of years evolving into the most dominant predator of the Pyramid-Tahoe-Truckee River system. Unfortunately due to over fishing, damming, and the introduction of other species, the original strain of these fish were nearly declared extinct until recent rediscovery of the strain near the Utah-Nevada border. This strain of Lahontan's that evolved in the lake today are called the Pilot Peak strain. The Pilot Peak cutthroats grow at an astonishing rate and have topped off to nearly thirty pounds putting this fishery on the map as one of the greatest in the world.

Pyramid Lake is a large lake that is has many beaches and points where anglers gamble to try and catch the fish-of-a-lifetime. I've created a Google map to show different locations with a brief descriptions. 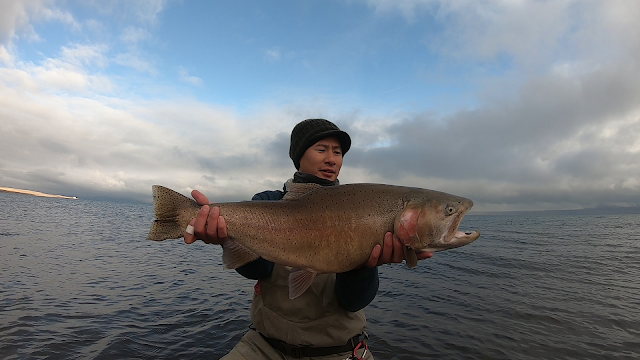 Many sources describe Pyramid Lake as a winter fly fishing destination however I find that the lake, like many fisheries, tends to fish better in the spring and fall. The true definition of Pyramid lake as a winter fishery means big Pilot Peak quality over the average Summit quantity. The weather is near freezing, the chilling wind can burn wet hands, and the fishing is slow but if you can brave the conditions you can potentially catch the fish of a lifetime.