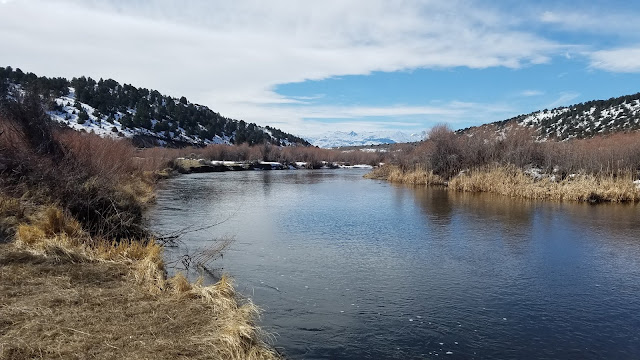 For the most part it looks like the majority of the severe winter storms are finished for the year which means spring time fishing is here. Every river and stream that feeds the valley is still too high to fish therefore options continue to remain limited. From the fishing reports that I've read it seems like stillwater fishing for bass and surf fishing for perch are the most productive. Stillwater fishing for bass is out for me because I don't own a motor boat and driving to the beach to fish without taking my wife is a guilt-trip conversation I don't want to have.
With all day-trip options out and wanting to fish some moving water I kept a close eye on the Eastern Sierras. The flows on the rivers and streams where fishing remains open all year looked great. It was just a matter of how to fish it during winter/early spring.


I left the house at 4am with a car packed and ready for an overnight trip. My plan was to primarily fish the East Walker River and stay the night around the area somewhere. My backup plan was to try Hot Creek and the Upper Owens if things didn't go according to plan.


East Walker River
I arrived at the East Walker at around 9am and immediately started fishing. I found that I wasn't alone on this beautiful Monday morning and settled for a nice secluded spot about midway through the Miracle Mile. "This was going to be so good!" I thought to myself. I tied on a few nymphs and bushwhacked my way to the river.

The river looked empty with little to no bug activity, no vegetation, and frigid water temperatures. I've seen streams like this before towards the very end of the season up in the Sierras. Finding a fish willing to eat was going to be very tough.
I covered quite a bit of water with no luck. I made the move to walk the bluffs to see if I could spot a fish instead of blind-casting to where I think they would be. It took a few minutes of scouting but I was able to spook a nice brown near the bank. I tried casting to it and got my flies right in front of it but it reacted by swimming further away. Don't leave fish to find fish. I made a few more drifts in the same area and saw a flash near my flies. I set the hook and was able to land my only fish on the East Walker this trip.
I covered more water and found a few schools of carp in the slower water but they weren't interested in playing.


Despite being at optimum flows of 200CFS the East Walker River was still asleep for the winter. When I fished it in the fall a few years ago there were tons of fish in the system. At least now I know...

A bit disappointed with my findings on the East Walker I left the river around noon to try my luck elsewhere. My next destination was Hot Creek.

Hot Creek
Hot Creek is a unique stream in that it is a cold spring fed creek that is counterbalanced with nearby hot geothermic activity. It does get hot in certain areas but is generally cold enough to allow trout to thrive even in the dead of winter.

It's a little less than a mile to get to the creek but it was a bit of an ass kicker because the snow was so thick. However once I got to the creek something magical happened. I had the creek all to myself.

The fishing was phenomenal. I had just arrived to the start of a BWO hatch and hooked several nice bows and browns on a dry before they stopped feeding on top. I nymphed the majority of creek and caught so many fish that I lost count. Most of the fish averaged a good 10-12'' with the exception of a few zingers that I landed or lost near the 14-16'' range. I didn't see a single soul until I decided to leave.


There are a crazy amount of fish in Hot Creek. As I would cross the creek I saw tons of fish darting out of places that I had previously drifted through. They are most definitely in there even if you don't hook them. I didn't see any monster-sized fish this time around but I'd love to one day hook myself one of those exceptionally large Hot Creek fatties.

I decided not stay the night because I didn't want to have to walk through all that snow again to fish; plus how can you top such an amazing afternoon. I somehow survived the 5 hour drive back and called it a day.