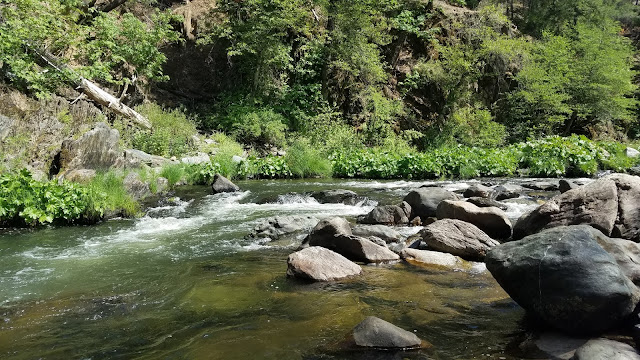 Spanish Creek is a small stream that runs through the scenic town of Quincy. This creek flows downstream from it's headwaters near Mt. Pleasant and Spanish Peak where it eventually merges with the North Fork of the Feather River. I've passed through Spanish Creek many times and have fished it near Gasner Park however I have never really took the time to go out of the way and explore it.
The Middle Fork of the Feather River is also reportedly fishing well in the Graeagle/Blairsden area. I've fished this section many times as well during the early opener however have never fished it during its prime.

Rather than taking the typical route of fishing the Hex hatch at Lake Almanor this year I decided to explore Spanish Creek and MFFR to find what lurks in it's waters.

The large snowpack this year shifted prime time fly fishing in the Lost Sierra (Sierra Buttes) a bit back this year with the high run-off. July is usually a hot and dry time of the year however this year is different with what felt and looked like early to mid-June weather and scenery.


I started fishing Spanish Creek near Keddie about mid-afternoon. Though the flows were great the water temperature was a bit warmer than I had wanted it to be. I made my way upstream and fished a few big pools and runs that produced several small stream rainbow trout. I switched between dries and nymphs throughout the day and ultimately stuck with the dry because it was more fun. Spanish Creek is supposedly known for its small but exceptional population of brown trout which are quite rare in Plumas County. Though I didn't catch a one this visit I did manage to spot a small one before spooking it away.
Although I felt like there was a bit too much frog water between the troutier sections, Spanish Creek is a good local option for those looking to get into some small stream fly fishing action near Quincy.

Middle Fork of the Feather River

The MFFR is by far the best fly fishing stream in the Lost Sierra whereas it is the largest stream that flows within the area. My plan was to check out the upper section between Clio and Blairsden this time in its prime.

I switched to my tenkara rod for this session and started fishing above Clio. The water in this section looked nice although similar to Spanish Creek slightly warmer than I would have liked. The upper section of the MFFR is also known to have a small population of brown trout that I was hoping to connect with.


I spotted several small fish hanging out in the feeding lanes but had trouble getting a solid hook set. Once I got my first good grab I quickly landed it to discover that it was a smallmouth bass. After the release and a short shrug I and made my way downstream hoping to find cooler water and trout.

The next area of the MFFR I fished was below Fraizer Creek. The water was a bit cooler here with near perfect flows. I switched between nymphs and dries and caught a lot more fish on the dry. I had trouble landing fish due to being inexperienced with my tenkara rod and became frustrated when I lost my first MFFR brown trout. The fishing in this section was decent but wasn't hot like I had hoped it to be.

The last part of the MFFR I fished was the Two Rivers and Camp Layman section. This is a short one hundred yard section that produces some nice quality fish. My tenkara skills seemed to improve after some practice in this section. I learned how to read my level lined indicator and started catching fish I couldn't see or feel.

Overall a fantastic outing. Both Spanish Creek and the MFFR will soon be entering their summer dog days so if you are interesting in fishing these two streams it'd be best to go now.