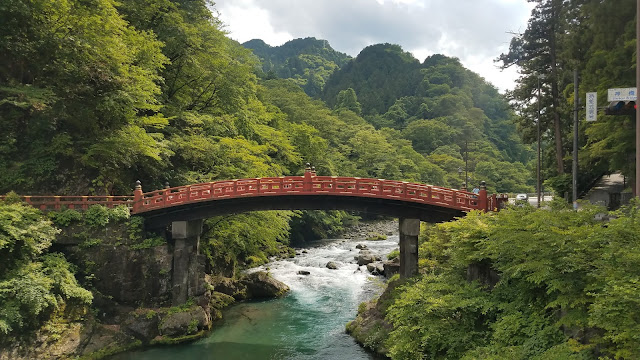 I've been curious about tenkara fly fishing ever since it's first initial introduction to the US several years ago. It essentially takes a minimalist approach to the ever increasing complexity of western fly fishing by limiting an angler to rod, line, and fly. Tenkara's rise to popularity in the west has created controversy of whether or not is considered "real fly fishing" with western anglers seeing it as simply dabbing flies and tenkara anglers seeing it as a true fly fishing due to the lack of a reel therefore not focused on casting special lines.
Every angler will have their own opinion however the most important question to me is, "Is it fun?"

My wife and I just recently got back from our first trip to Japan and brought back many things that we found either practical, fun, or cute. What pushed me to get a tenkara rod was seeing the only angler we saw throughout our trip tenkara fishing on a beautiful small stream. Our bullet train passed him quickly and the image was imprinted in me like parts of a dream. Once we got back home the first thing I did was order a tenkara rod, Tenkara USA's Sato rod.

This isn't quite the first time I've tried in tenkara style fishing. A few years ago I bought a cheap $10 tenkara rod off Amazon and fished with it until it finally broke after the fifth trip. It was fun but at the time it didn't seem like something I really wanted to get into. It was only after visiting Japan and getting the "feel" of the geography, history, and people that tenkara make more sense to me. I wholeheartedly believe that a lot of what makes tenkara special is lost in translation here in the US. To this very day I have yet to watch a video on Youtube that captures the essence of tenkara fly fishing. The video by Tenkara USA titled, Tenkara Diaries - Japan 2013: Mr. Sebata would perhaps be the closest to the feeling of tenkara fly fishing in my opinion.
Fly fishing is a niche and tenkara fly fishing is a niche within a niche. I believe tenkara is neither fad nor future it is simply just a change in perspective.


As soon as my Sato rod arrived I wanted to gave it a field test. Reluctant to drive a few hours to a small trout stream where tenkara fishes best, I decided to head out to my local stomping grounds on the Yuba River.
With summer in the air I knew I could rise some fish with a hopper pattern. I managed to rise and hook two bows that I lost due to poor tenkara fighting skills and rose a few more that refused. I later switched to a nymphing rig that worked but at the same time didn't. The fish seemed to my presentations however they broke off as soon as they were hooked due to the lack of running line. Throughout the day I managed to land two trout while losing many others.


Tenkara does not work on Yuba trout. Lesson learned. Yuba rainbows fight like steelhead and tend to take a lot of line when they are hooked making them near impossible to land on a tenkara rod. Some tenkara advantages I did noticed was the ease of presentation and how quickly I was able to land the fish that I managed to get to the net. The long length of the rod made tight-line nymphing productive and the distance help keep me from scaring fish.

I have yet to find myself on a small stream where tenkara is meant to be fished however I believe that I'll have a lot more fun and luck landing fish when I do. Cheers to summer!