A Trip To Milton Reservoir 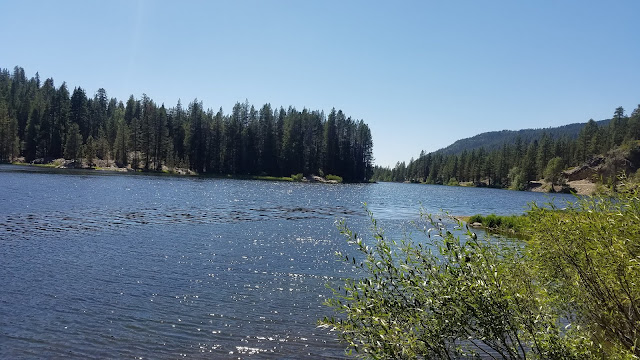 Milton Reservoir is a small 12-arce lake within the Middle Yuba River drainage. It sits within the Tahoe National Forest at an elevation of 5650ft and is supposedly managed as part of DFG's wild trout program. The lake is not stocked, has a two fish limit that must be below 12'', and is barbless artificials only.
Hoping to beat the heat and catch a few fish, I decided to explore Milton Reservoir to see if it would be a place worth visiting again.


There are two ways to get to Milton Reservoir from where I live:
1. From Marysville Road to HWY 49 then cutting through the small town of Forest to Henness Pass Road.
2. From HWY 20 to HWY 80 to HWY 89 to Jackson Meadows Rd/Henness Pass Road.

Google Map directed me to Milton Reservoir via the first option which was paved until the last twelve miles. Those last twelve miles were on a very rough dirt road that required a high-clearance or 4x4 vehicle. I would not recommend anyone who is interested in visiting Milton to go this way but rather the second option which had only about five miles of dirt road. 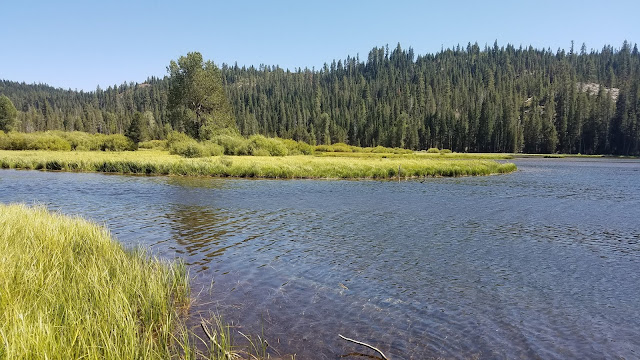 Milton Reservior is known for its brown trout that are notoriously difficult to catch. I had a good idea of what I was going to be up against and prayed that the fish would cooperate with me. I rigged by stillwater rods as I always do: one rod with floating line for indicator fishing and the other with intermediate sinking line for streamer fishing.
Having arrived at the lake at about 3pm I wasn't too sure about how well it would fish. The afternoon winds started picking up and the slight chop made it a bit difficult to scout around and spot fish.


The west and north side of the lake appeared to be much deeper than the east and south side however I didn't spot any fish in that area. The point on the southern part of the lake appeared to have the most cruising fish and insect activity.
I managed to get a few takes within the first few hours and lost a decent brown that took a callibaetis nymph however that was about it my entire day. I was hoping that the evening would bring out a few fish however I was not able to get any takes before the sun went down. 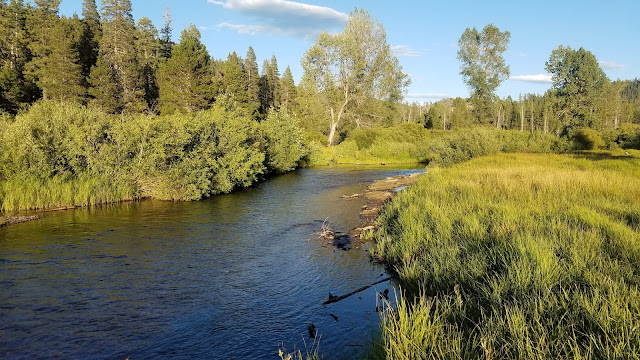 From afar Milton Reservoir looks like a trout paradise. The water was cold, the habitat for the fish looked great with three different outlets for spawning, and there was plenty of aquatic vegetation for insects. I'm curious as to why I didn't do well. I have two thoughts:

1. There isn't a whole lot of fish in the lake itself. The lake is surprisingly popular for being quite secluded which means it sees a lot of traffic. All the primitive campsite spots were filled while I was there on a Thursday. It's possible that anglers who don't care or aren't aware of the Milton's regulations poach the fish there leaving very few behind.

2. The insect population at Milton seems to be lacking. As I pulled my anchor out of the water I sifted through the weeds to see if I could get an idea of what the fish were eating. To my surprised I found very little to no insects. There were quite a few midges hatching in the evening that the fish appeared to be rising to but not in the numbers that would make me want to try a dry.

3. My timing was off and I needed to be there from mid-morning to early afternoon when the hatch is at its peak. Fishing is fishing.

I may try fishing Milton Reservoir again in the future however it was not quite the Manzanita Lake of Tahoe National Forest that I was hoping it would be.