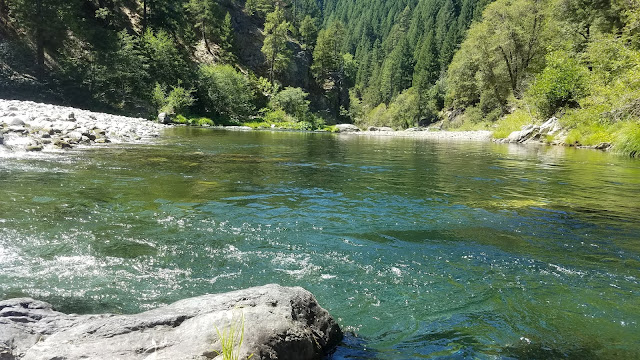 August can often be one of the warmest months in Northern California. The average temperature this time of the year usually ranges from the low 90s to triple digits making the heat miserable for both anglers and fish. This summer however has been a bit of an exception. The large snowpack that we received during the winter and spring has helped provide cooler water for fish giving anglers more time than previous years to purse their fishy friends.
I spent my last weekend in Plumas County, a recipient of this cool water blessing, and got into some of the best fishing I've had this time of summer in a long time.

My first destination would be Yellow Creek near Almanor. It's been about three years since I last visited this beautiful spring creek and I was excited to see if there had been any improvement with the fishing. Although the meadow was looking a bit yellow it was also mid-summer so I wasn't expecting verdant green fields this time of year. I settled for a spot a bit below the empty Yellow Creek campground and rigged up my 3WT.
A quick look into Yellow Creek made me rethink if driving to the creek was a good idea. There seem to be an awful lot of green algae settled in the bottom of the creek which I had never seen before. Spring creeks are suppose to be made up of the purest and cleanest water so why was there so much gunk everywhere.


I started working my way around the creek and found a few small fish here and there. It was mid-afternoon so dry flies weren't working too well. I switched to an indicator rig and began picking off fish. Most of the fish I spotted and caught where small however I did manage to sight one of the biggest fish I had ever seen in this creek near an undercut. It looked about +18'' and spooked as soon as I noticed it. After catching few rainbows and a brookie I decided to move to a different stream. The fishing was just too slow for a few dinks, not fun.


On the way out I stopped at Butt Creek. I've seen a few nice browns in this creek however I've only had luck catching dinky rainbows even smaller than those in Yellow Creek. I left after about an thirty minutes still yearning for better water and better fish.

As I made my way to Quincy I stopped and fished Indian Creek below the falls. This was my first time fishing Indian Creek and unfortunately it didn't fish as good as it looked. I managed to land a small trout and a hardhead before calling it quits. I felt like Indian Creek had more of a population of rough fish than trout. Maybe things are different when the flows are bigger and cooler though. I may have to try it again next season before crossing it off my list.


I spent the night at my in-laws who live about ten minutes away from the Middle Fork of the Feather River. The MFFR usually runs a bit warm this time of year giving me doubts about how well it would fish however I couldn't beat how close it was to the house.

I hiked into the canyon and found myself in a familiar place that I wish I returned to more often. The cool breeze as I stepped into the cool water felt nice and the river looked like it was in fantastic shape. The fishing was excellent. There were fish everywhere, in the riffles, runs, pools, tailouts, and even in the flats all eating dries, streamers, and nymphs. It was nice to hook into some quality MFFR fish instead of just dinks this weekend. These fish were wild bright red white tipped rainbows that only a wild and scenic river could produce. Now that is what I call fun.