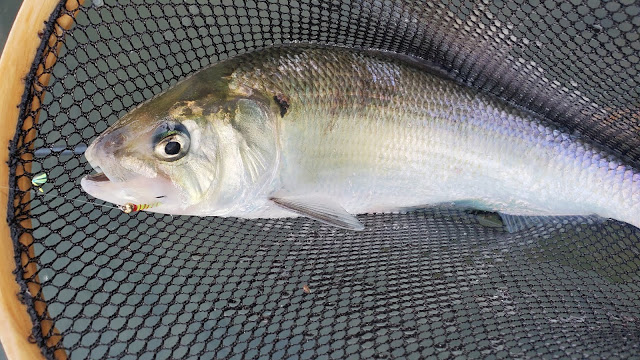 For the last couple of days I've have been spending a few hours on the Feather River fishing for American shad. The fishing has been pretty good and despite the hoards of folks out due to COVID19 there appears to be plenty of fish for everyone to catch. So far I've been pretty successful and even had my first double digit shad day. Hooking and fighting an American shad is always fun but for me every shad I catch wears off a bit of the novelty. To keep myself from getting too bored of the shad run I've been experimenting with different patterns and trying to come up with my own "hot" shad patterns.


American shad are primarily plankton feeder that will occasionally eat small shrimp, fish eggs, and other fish. Why these fish strike flies, lures, and jigs during the spawning run is still poorly understood though there are many different theories. Many different patterns work for shad however the main attractors seem to be bright florescent colors and flash.


After tying a few different patterns and trying them out it seems as though a pattern needs to have a perfect combination of design, color, and flash in order to get a strike. The shad patterns I tied in "grub" style seem to work the best. I found the "hot" fly by rigging two flies and trying to get the fish to strike both patterns. If one was working and the other was not I would keep the one working and tie on a different pattern. Once both flies were getting bit I was catching fish every couple of casts. I even tried a three fly rig but that didn't work too well due to twisting, turning, and tangling.


The fish are in the Feather but with minimal flows at 561 CFS they are concentrating in small particular areas of the river creating an early bird gets the most fish type situation. The low flows have made getting around the river easier however it has also made the river slower creating froggy spots and eddies. I was surprised and frustrated at how difficult a little bit of wind ripple on the surface made presenting my swing due do these flow-less spots. Nonetheless I overcame the challenge and caught fish.