Solo Trout Bum On The Trinity


The Trinity River boasts some of the biggest steelhead in California with 10+ pounders being caught occasionally during the season. I had some CSET testing to do in Redding and at the time, was thinking about doing a day trip fishing the Upper Sacramento River. After paying a visit to the local fly shop I decided to go big or go home. This would mark my first overnight solo yolo camping trip to an area that I've never been to. With my fly rod, fishing vest, camping supplies, and a pillow and blanket I was off.

Trinity River
I arrived at my destination on the Trinity around 3pm. The drive was fairly pleasant despite the heat the entire trip. As I pasted through the numerous small towns and road construction I took the time to admire the geography of the canyons, mountains, and valleys. Once I went over the bridge entering the canyon I could see the river below me and she was as beautiful as ever, the Trinity. Seeing the river made me very excited, so excited that I had to stop myself from pulling the car over to the many turnouts that lined the river to try and fish it. 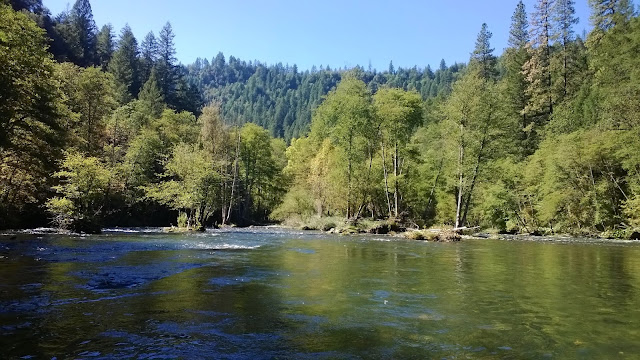 Once I had driven over and scouted my "HQ" campground it was time to find an area to gear up and fish. About five minutes away I found my spot. It had a long run and a deep pool at the end of it. Surely there would be some steelhead there. So I pulled into the turnout, geared up, and found the way down canyon. As I was lining my fly rod I could feel the heat of the beaming sun. My car read that it was 95 degrees at this time. After touching the water I felt it wasn't cold. I used my stream thermometer and saw that the water was about 68 degrees which is alarming when fishing for steelhead. After I looped up my 1x leader, I tight-lined a nymph down the pool and caught a few small trout but nothing I was looking for. Working my way upstream, I finally came to a riffle area that was too wide to nymph and decided to throw on my sinking tip to swing the flies and more water. Each step moving upstream made these little frogs hop into the water. I should have brought my frog flies.

About an hour after I started fishing the wind really started to pick up. The water would shimmer which ever way the wind was blowing making it harder to cast and detect bites. After covering the run and only catching smaller fish I decided to head back to the car and find a new area to fish. I had about an hour and a half of sunlight left so I left quickly, bushwhacking through shrubs and trees to get back to my car.
After finding my next spot with relative ease. I dropped down to the end of the riffle and starting working my way up again. Time and time again I would get a hook up but only catch small trout. There was about fifteen minutes of light left so I packed up and headed back to the campground.

I found a camping spot and after paying for it I decided to start a campfire. I challenged myself on how many matches I would need to use to get one going. It took four. Three too many. After eating dinner and hanging around for a bit. I felt lonely but not a needing someone else kind of lonely. It was the feeling of tranquility and peace. Nothing else in the world beside me and what ever else was out there. It was a weird feeling that I didn't understand but accepted it. I was beginning to tire so I set up my car bed. It wasn't the most comfortable place to sleep but I'm not known for sleeping in comfortable areas. The night was fairly warm and didn't get cold until around early morning. I had planned my next strategy, to attack the run at its source.

Although I found myself waking up during various parts of the night I woke up just in time to pack things up and head on out. I stopped by a rest area to brush my teeth and wash my face and after that I was off to the town of Hoopa, which is about 10 miles away from the mouth of the Trinity River.

Once I got to Hoopa I mapped out an area outside the town that I was hoping to fish. Unfortunately it turned out to be on top of a cliff so I had to back track down to town. I found a new spot with a long riffled run. The bottom of the water looked was very sandy and full of algae like I was at the ocean and it smelled like it too. The water was warmer than the outside temperature which made the fish extremely aggressive.There was another fly fishermen fishing it from the other side and while I was lining my rod I could hear his reel screaming as he hooked up. The fish weren't that big though so I thought to myself that they were probably just half-pounders, immature steelhead, making there way up from the ocean first. After I hooked a few I could tell they were half-pounders. They were stronger than the average native trout; they were on the smaller side but they threw the hook easy during their jumps if you didn't play them carefully.

The Trinity River is all barbless. After the other fisherman left I had the whole run to myself and I covered it like crazy. I hooked and landed one of the bigger half-pounders of the day and took and picture with it. As I fished that I run I saw the biggest fish of the trip roll over. It had the steelhead colors so I knew it wasn't a salmon. It must have been at least 28" and 8+ pounds. I cast several times in its direction but nothing happened. I was off to a new spot.


Scrambling through my map I saw a piece of the river that I wanted to fish. I was distracted and stopped at a different place along the way. This was underneath the Hoopa bridge where there was a nice run below the bridge and above it was glassy slow moving water. I didn't catch anything in the run but above it there was some good technical fly fishing. Stealth and presentation were key.

Now when you swing a fly the line is tight therefore when the fish takes it you can feel the jolt of the take. Its one of the most exciting ways to fish for trout. I hooked a few half-pounders with this technique and right around 10am they stopped biting. They were still rising for midges (my best guess) but I wasn't going to take the time to fish for them that way. After switching through several flies and hooking one last fish I decided to end my trip.

It was quite the experience living as a true trout bum. Its amazing how such great rivers and streams are so close to us in Northern California. Four hours is a short drive when your on the water giving the best presentations to these amazing fish while intercepting them as they continue their hundred mile journey to spawn.  I didn't get my ten pounder but I will be out there again until I get one. As for now I am looking into different streams to be a trout bum on. Steelhead season... its on!