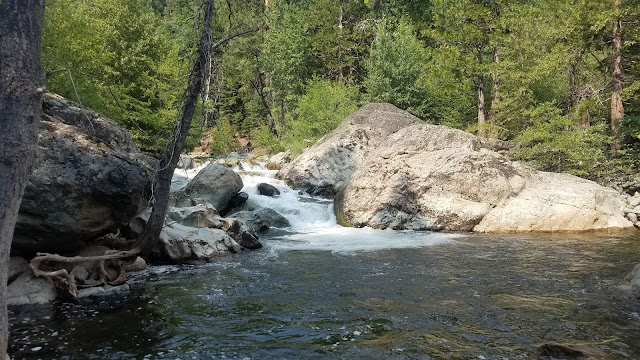 The last time I fished the North Fork of the Yuba River was about two years ago during the drought. Low flows and warmer than usual water temperatures made the fishing tough and with no experience of where to go during such times I didn't have a great time on the water. With the excess of water this year I thought it would be a great idea to give the NFYR another try to see if the fishing would be any better. It's quite a long drive to the NFYR from the valley so I was planning for either a hit or a miss.


The northbound lane up HWY 49 is a single lane highway which makes a pain to traverse if there are a slow movers. It took quite a bit of time to get to where I wanted to go but it was nice to finally get up to cooler weather.
The last time I visited the NFYR I made the mistake of fishing a section that was too warm so I tried the upper canyon of the NFYR near Sierra City. This section had plenty of deep pools but getting around was too tough. Hiking and wading down a steep gradient with super slippery boulders for small trout didn't seem worth it. After catching a few I drove downstream to find some easier water to fish.

Despite HWY 49 paralleling the NFYR for several miles there are only a few turnouts where you can park and access the river. I scouted out several access points and settled for the Ladies Canyon Creek section. The rocks in this area were also very slippery and I had a tough time getting around. Dry flies were my first go-to but that quickly changed as I noticed only small fish rising. Most of my fish came off nymphs that were tight-lined. I was hoping I'd catch some bigger fish this trip but most of the trout I hooked were less than 10''.


The NFYR is a decent fishery but personally I felt that it wasn't worth the almost two and a half hour drive. Unless I'm in the area for another reason I'll be spending my time on the water elsewhere.