Swinging Alevins On The Feather 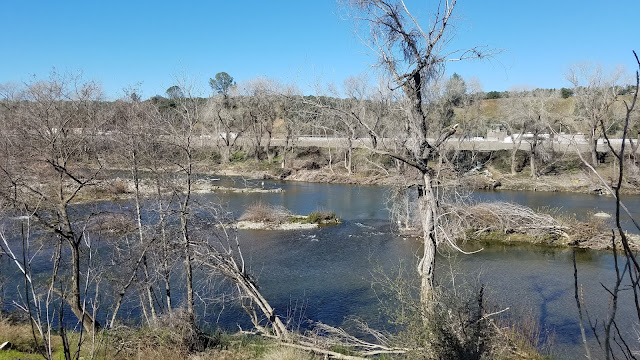 As the main source of where the Oroville Dam diverts its water, the Lower Feather was pushed to it's limit at 100,000 CFS last year during the flood crisis. Trees were ripped from their roots, gravel was flushed downstream to the delta, and the town of Oroville was close to being underwater. The faucet was kept off and on for months after the flood crisis in efforts to control the devastation of mother nature's gift of rain.

Unlike the Yuba River much of the Lower Feather River surprisingly remains the same. Many of the same riffles, runs, and pools are still there and holding fish. We have the riparian habitat surrounding the river to thank for that. The Feather fished well last year during the fall salmon run and continues to fish well.

I've come to terms with just purely swinging flies on the Feather to challenge myself and give the fish a good fighting chance. February is alevin time and getting a grab from a baby eater was what I was looking for.

The hatchery section that opened January 1st still looks and fishes the same despite the flood. There are a lot of fish out in this section at the moment; perhaps the most I've seen in a long time. Most of them are spawning but there are a few that are willing to eat. I swung an alevin throughout the day and got a few takes but only one solid grab.

In many areas of this section I noticed fish rising however when I swung my pattern to them they wouldn't take. I'm thinking this is them acting more twitterpated than hungry. Similar to how salmon will jump three feet in the air for no reason during the run, these trout are only interested in one thing at the moment.


The Feather will only get better as the spring-run steelies make their way up river. The spring-run is my favorite run to fish because they tend to fight harder than their fall-run cousins. Lets just hope we get some rain soon to help aid them on their journey upstream.


The Yuba also continues to fish well. High pressure and windy conditions can make it tough to fish but the bugs are still poppin. Make long downstream drifts, target slow foam lines, and keep an eye out for risers. Skwalas are still on the menu but there have been a few good PMD hatches out. I've seen pictures of a few bigger fish out there so at this point you're never know what you're going to get.