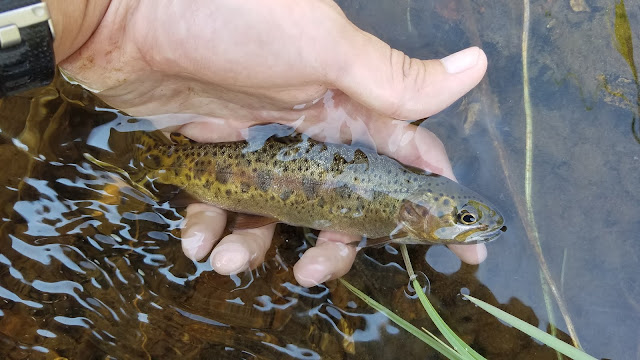 Dismal Creek is one of the most well-known places to try and capture a Warner Lakes Redband. This small piece of water is well-documented to have a self-sustaining population of Warner Lakes Redbands that many anglers have caught, photographed, and submitted for the California Heritage Trout Challenge. The only problem I had was that it was on the exact opposite side of the where I was in California.

The drive to Dismal Creek all the way in Modoc County from Patrick Creek took a little under six hours. The drive was a bit grueling due to the not-so-scenic agricultural lands and high desert landscape however I did pass by several lakes and streams that looked interesting, most notably Upper Klamath Lake and the Sprague River.


Once I made it back into California and passed the town of New Pine Creek I knew I was near my destination. The dirt road that took me into the mountains was in fair condition and I arrived at Dismal Creek within 30 minutes.


Dismal Creek is located at nearly 7,000ft elevation and sits ontop of a valley full of grazing cows. There wasn't a single soul out there and I didn't see much reason for anyone to visit such a remote place with the exception of fishing for native heritage trout. My first impression of Dismal Creek was, "Do fish live here?" The creek was only two feet wide at most and had flooded runs, deep undercuts, and shallow pools. I parked next to the creek and scouted it out to see if I could find any fish. The first thing I saw in a deep undercut was a small trout. "Holy crap there are fish here."

I continued scouting for better pools to target and found a nice one right in-between two overhanging bushes. I saw several trout darting back and forth and started to undo my dry fly. Casting into the pool required pin point accuracy which made the fishing quite challenging. I managed to get a good cast and waited for the fish to respond. I was expecting a quick grab however I had to retrieve and twitch my dry a few times to solicit a take. After a few seconds of fight into the net was my first Warner Lakes Redband.


With my native trout challenge completed I continued to explore Dismal Creek. The fish were all very spooky which made sight casting for them near impossible. As soon as they spooked into cover there was no way of making them come back out again. There were quite an abundance of fish in this small ditch of a creek which truly amazed me. After I caught a few more fish I decided to call it quits and head out to my final destination.