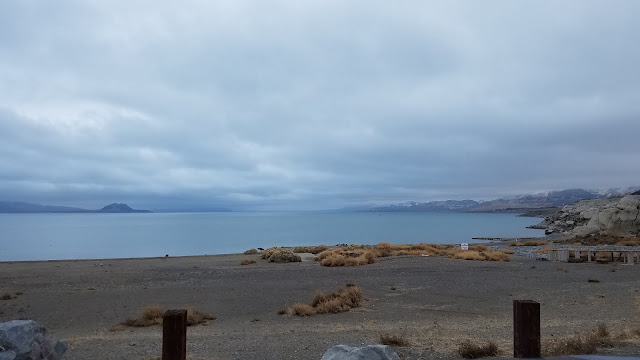 Pyramid Lake is a remnant of an ancient lake that covered the majority of northwest Nevada during the Pleistocene/ice age era. Pyramid Lake covers over 120,340 acres and is one the largest natural bodies of water in Nevada. The lake is home to the world's largest cutthroat trout the Lahontan Cutthroat Trout. This particular species of cutthroat trout spent thousands of years evolving into the most dominant predator of the Pyramid-Tahoe-Truckee River system. Unfortunately due to over fishing, damming, and the introduction of other species, the original strain of these fish were nearly declared extinct until recent rediscovery of the strain near the Utah-Nevada border. This strain of Lahontan's that evolved in the lake today are called the Pilot Peak strain. The Pilot Peak cutthroats grow at an astonishing rate and have topped off to nearly thirty pounds putting this fishery on the map as one of the greatest in the world.

Pyramid Lake is a large lake that is has many beaches and points where anglers gamble to try and catch the fish-of-a-lifetime. I've created a Google map to show different locations with a brief descriptions.


Note: All access points and roads above Warrior Point Beach are currently closed. The eastern side of the lake is also closed for the 2018-2019 season.

Locations beginning from the south:

Popcorn - Shallow beach. Being near the only inlet of the lake, the Truckee River, this beach can have good insect activity. Shallow areas of Pyramid Lake can be food for nymphing due to being in the littoral zone.

Cattleguard - Moderately deep beach. A nice beach at the southern end of the lake that can be a good spot when the more popular Popcorn Beach is crowded.

Blockhouse - Very deep beach. A nice deep beach where you won't have to get too close to the water since it's drop off is so steep.

Rawhide - Moderately deep beach. A standard beach that sits in a small cove that offers a bit of protection from the wind.

Sandhole Beach - Very deep beach. One of the deeper beaches at Pyramid Lake. Like its name implies, this beach can be very sandy therefore use caution when exploring in a vehicle.

Wino Beach - Moderately deep beach. The Albino Wino is a fly pattern that was named after this beach. It is a good standard beach that allows both streamer and indicator anglers opportunities to catch fish.

Indian Head Rock - Moderately deep beach. At it's point the southern part of this beach is deep whereas the northern half has a slightly more moderate drop off.

Tamarack - Moderately shallow beach. One of first beaches you encounter when driving around looking for a place to fish which is probably why it is one of the least fished.

The Washout *Closed*- Moderately deep beach. Created by a flash flood. You can see how much water raged through the land to create this beach as you drive towards the lake.

South Nets - Shallow beach. One of the most well-known beaches at Pyramid Lake. Near where the hatchery collects fish when they spawn in the spring, this area is a potential magnet zone for fish when they are in spawning mode. Be aware of the 1000ft boundary from the hatchery.

North Nets - Shallow beach. Another well-known beach on the opposite side of South Nets. Similar to South Nets, this beach is near the hatchery and has the potential to a magnet zone for spawning fish. Be aware of the 1000ft boundary from the hatchery.

Pelican Point - Moderately deep beach. This is the most well-developed fishing access at Pyramid Lake and serves as the main boat launch of the lake. The southern end has large tufa formations that can be good for indicator nymphing whereas the northern end is a nice sandy beach.

Windless Bay - Moderately shallow beach. As its name implies this bay is well protected from northern and southern winds.

Spider Point - Moderately deep beach. The access road to Spider Point can lead you to a few secluded beaches that very few tread to.

Shot Dog - Moderately deep beach. A bit of a drive to get to but you are rewarded with a nice beach with some tufa formations to the south.

Warrior Point - Moderately deep beach. The point itself drops quickly and northern end is a good place to use a float tube since it is protected from the southern wind.

Warrior Point Beach - Moderately deep beach. This is a nice beach with a lot of different structure such as rocks, rock piles, and weeds hidden underneath the water. This beach becomes shallower as you head north.

These beaches are currently closed: