On A Mission At Mission Bay 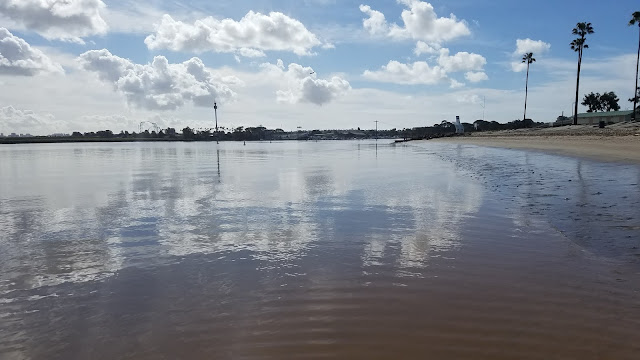 Mission Bay is a large man-made lake that can be found near the San Diego International Airport and is primarily used for recreational purposes. Several different species of fish can be found in Mission Bay however anglers primarily focus on the abundant spotted seabass holding within the bay's eel grass. I've always been interested in fishing Mission Bay and an opportunity to fish some new waters during all these blowout storms was well welcomed.

My wife and I flew down to San Diego for a weekend trip about two weeks ago for a concert that she wanted to see. To kill some time before the concert I brought my new 7 piece 6WT to try my luck either on the surf or the bay.

Tides are everything when fishing coastal waters. In preparation for this trip I checked the tides and was disappointed to find that I would be fishing a spring tide with a huge outgoing tide. I read that any moving water is good water however past experiences have let me to believe that an incoming tide always fish better than an outgoing tide unless the conditions are perfect and the bite is red hot. I knew my chances weren't very good but I decided to try it anyway, you never know until you go.

For this trip I brought my Teeny-200 sink tip line which has become my most favorite line for stillwaters and the surf. All the intel that I had gathered about Mission Bay directed me to fish near structure with eel grass. Apparently spotted seabass like to hold in eel grass as opposed to the sandy areas that I'm more familiar with. These fish are also suppose to be lazy fish that use the current to feed rather than to cruise and chase.


We started the day below the southern end of Ingraham bridge right off the rocks. It looks like we had missed a major storm system the night before. Park maintenance workers were all over the park picking up fallen branches and gathering them into piles. The water in the bay was receding quickly and looked like chocolate milk. I tied on a clouser with a dropper and made 30ft casts into the bay with hopes of maybe hooking into something. I became frustrated as I kept getting caught on the eel grass and eventually decided to take off the dropper. It didn't help. It didn't take long before I decided to call it quits.

After a bit of disappointment we left for Mission Beach. My hopes of hooking something this trip looked a bit better out on the surf. The surf was looking beautiful: crystal clear water, lots of good structure, overcasted, and good surf action. Despite these amazing conditions I couldn't find a single fish out in the ocean. Perhaps the surf perch are adapted to a bit of different water temperatures out in San Diego? If I had fish these conditions in Northern California I would have been hooking fish left and right.


My first Southern California fly fishing trip was a bit disappointing but I had a great time at the San Diego Zoo and just travelling in general. I'm planning on head out again to San Diego in the summer to hopefully hook into a few goodies that I missed this trip.