My Last Outing Before Becoming Essential 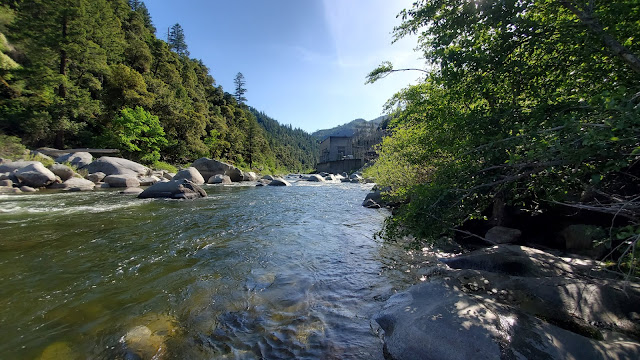 I've been on paternity leave for almost 8 weeks now and next week my work life resumes. It's been great being able to take care of baby and things around the house without worrying about going to work. All good things must come to and end but before it ends I needed one last fishing outing that would satisfy my thirst for adventure. Somewhere new that had fish...


Martis Lake was my first choice. I had prepped tons of new stillwater flies that I wanted to fish but as I was prepping the evening before I thought about the access possibly being closed. I quickly googled whether not it was open and was disappointed to find out that it was closed. Go away coronavirus, no one is scared of you anymore!
Plan B popped into my head spontaneously after a few minutes of thinking where I should go instead.

The North Fork of the Feather River.

It's been a few years since I've had the chance to fish the NFFR. For the past two years high flows have kept me away from my second favorite river. With a somewhat dry winter this year I figured it would be a good time to try and fish it again in addition to exploring some new areas.


Although I haven't fished the NFFR in quite a long time I frequently travel through the Feather River canyon to get to my in-laws in Quincy. The past few of times I've driven through the canyon in late spring and summer I've noticed a huge evening caddis hatch. The bugs were so thick one night that I needed to use my windshield wipers to see the road. It appears that the caddis population has exploded since the flood of 2017.  I had my fingers crossed that I would find the same number of bugs during this visit.


I arrived at my destination at around 10:30am. Flows below Rock Creek Dam were around 170 CFS, below Grizzly Creek 200 CFS, and below Poe Dam 346 CFS. I would consider these flows perfect; there were still plenty of fishy spots and I was able to get around the river relatively easily. The water was nice and cold and the spring creeks were still running. The wind in the morning was a bit gusty but once it began to warm up the wind died down a bit making it easier to cast.


The fishing on the NFFR has been the best I've ever fished it. There were tons of caddis in the morning and the fish were taking caddis dries and nymphs throughout the day. I was able to catch one of these fluttering caddis and noticed that they had a forest green abdomen. After a bit of research I found the specific species as apple caddis.
The bows in the NFFR like to hang out in heavy current and deep pockets and I found them where they should be. I forgot how strong these fish pull, many flies were sacrificed to the river gods.